In todays world when we think of weapons we think of guns, crossbows, and knives.  And why not, the technology in state of the art weapons make them much more accurate and durable than their predecessors.  Hopefully your aware that these weapons have evolved over time from much more primitive weapons.  The lessons learned over centuries of weapon design have led to vast improvements, which ensure your weapon works right the first time and every time thereafter.  But to understand where these improvements came from lets take a step back in time and examine some earlier weapons.

Today I’m talking about bolas and how to make your very own using a little 550 cord.  A bola is a length of rope with weights on the ends used as a throwing weapon.  When the bola was thrown at an animal the goal was for the rope to wrap around and entangle the legs. 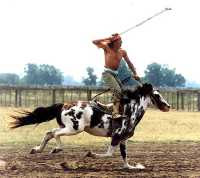 Bolas were used by gauchos in South America dating back into the 15th century and earlier.  It allowed the gaucho to swing the bola overhead from horseback or on foot and catch animals within a 20 foot radius.

There are several variations of bolas consisting of a varied number of weights on the ends.  A Perdida is a bola with a single weight.  One of the most common is a boleadora which is a bola consisting of two heavier weights on smaller lengths of rope on one end of the larger rope, and a lighter weight on the other end of the larger rope.  When thrown the heavier weights go out front.  The goal is to get one weight to go on either side of the animals legs which then allows the trailing lighter weight to follow and wrap around two or more of the animals legs.  There are many more variation which include up to 10 weights.

Bolas can easily be made from a little paracord, some fabric, and a few stones. The picture to the left shows what you are basically trying to achieve.  Start by placing a few stones in a piece of circular cut material and fold up to make a small pouch.  Use some 550 cord to secure the top.  Repeat this two more times until you have three pouches.  Add more stones to two of the pouches so that they will be a little heavier to make up the leading edge of the boleadora.  Take another piece of paracord approximately 5 feet long.  At one end attach the smaller pouch.  At the other end attach a larger pouch.  Take another smaller length of 550 cord about a foot long and attach to the existing rope about a foot up from the larger weight.  Then attach the remaining large weight to the end of this smaller rope.

Try it out by swinging over your head and try to aim at something like a small branch on a tree.  The idea is that it will hit and then wrap around.  You can experiment a little to get just the right amount of weights and throwing technique down.  You can also try to throw the bola in just a single swing by holding the heavier weights behind you and the throwing overhand while releasing these weights.  Again experiment and see what works best for you.

To make this a little more fun and portable try using money fists instead.  Create monkey fists using paracord wrapped around ball bearings or some other spherical object of decent weight.  Make a couple heavier ones and a couple lighter ones.  Then you can experiment in the field with swapping these on and off to a longer strand or strands of paracord making up your main rope.  Again experiment and practice throwing until you can consistently hit the same spot and have the bola wrap around the object.

We will be posting a few pictures of bolas we are making soon so check back and take a look or purchase your very own custom made boleadora.  It will certainly be a conversation piece and a little history to share with your friends.

Back to the basics - rope, wood, stone, and other natural materials